The one and only sequel to Merit's earlier Operation Combat, Operation Combat II is even lesser known than the original despite sporting improvements in all areas. As in the original, you choose one of six available battle terrains, then face off against an opponent (either computer- or human-controlled) with the simple objective of annihilating the enemy's headquarters.

Although the interface remains largely the same, Operation Combat II has many more options than its predecessor, including new types of attack ordinance, more emphasis on supply vehicles and air support, The gameplay remains largely intuitive, and the graphics has been upgraded to 256-color VGA. The innovative "timed turn-based" feature of the original game (i.e. there is a time limit per turn) is still around, as is the simple click-to-move-or-to-attack mouse-driven interface. The variety of landscapes and buildings has been increased, and new sound effects added to round off the improvements.

Even moreso than the original, Operation Combat II is a decent entry-level wargame whose best feature is the 2-player option (modem and null modem connection). It is not a bad game - it just pales in comparison to the play value of QQP's classic Perfect General series or Dani Bunten's good old Modem Wars. 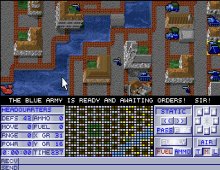