Operation Com*bat is an abstract wargame that, according to veteran wargamer M.E. Brooks, "….did nothing really well, although it was one of the first to emphasize modem play." The game does have a few innovations that are worth noting, including attractive isometric graphics and real-life terrain (which are still tile-based, but not obviously) and modem play options as M.E.B. noted. One of the more interesting features is a "timed turn-based" gameplay: you are given 240 seconds to finish your turn, so quick thinking is required.

Despite new features, at the end of the day a wargame is only as good as its AI and the range of commands, and here Operation Com*bat falls apart. The game is very limited, even considering the narrow scope of pitting a nondescript Red army against the Blue army. There is only a handful of maps you can choose to wage war on, and no randomization is possible. This makes the game much shorter than other abstract wargames such as QQP's venerable The Perfect General, and a lot less appealing. Modem play is implemented quite well, although the options still pale next to Dani Bunten's classic Modem Wars. Compared to other wargames, Operation Com*bat simply is too primitive and simplistic to warrant any attention from wargamers. Stay away from this average game, unless you are curious about what early multiplayer-focused games play like ;) 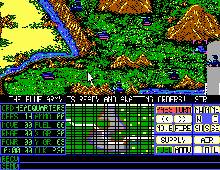