One of the *best* strategy games ever made, OMEGA lets you program futuristic cybertanks to wage wars. The box touts "The only game of its kind!" and it isn't far off the mark. Using a simple programming language not unlike BASIC, except with an even simpler syntax that resembles the English language, you can put together a fairly complicated set of commands for your cybertank to execute, through the use of innovative "intelligence capsules." As if designing the ultimate AI isn't enough, you can also design battlefields for your cybertank to fight in, with buildings, water, trees and roads. A truly remarkable programming feat that stands the test of time, and remains infinitely replayable even years later. The game even lets you download and upload cybertanks via modem from various BBS'es and other computers (in 1988!) 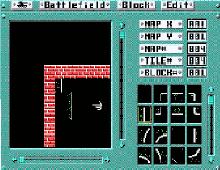 People who downloaded this game have also downloaded:
Reach for The Stars, Romance of the three Kingdoms 3, People's General (a.k.a. Dynasty General), Populous, Lost Admiral, The