Offensive is a rare and very little-known isometric squad-level wargame from Wave Software, published by OCEAN in 1995 with very little fanfare. Developed by a short-lived programming group called Wave Software, the game plays like a cross between Cannon Fodder and X-COM, although not as good as either game. In this squad-level real-time strategy, your objective is to lead the army to victory in the "western front" theatre of World War 2. In each mission, you can issue orders to your units to move around an isometric map. Units range from infantry, tank, artillery, and more.

Despite attractive graphics (the day-to-night cycle is quite nice to watch), varied terrain, and a simple-to-learn interface, Offensive is not likely to attract much attention from either wargaming or action camps. The gameplay is too simple to appeal to wargame fans, and there is not enough action to attract joystick experts. Your orders are limited to move to, attack, hold area, and retreat, but you won't have to use the last two most of the time because the computer opponent cannot put up much of a fight. Too bad the attractive graphics is wasted in this game whose obscurity is somewhat justified. 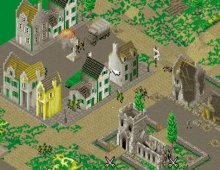