A rather unique war game simulation. You can decide to be several different people and the game is created after the way you make your choice. The game engine and interface are pretty simple as all you have to do is to deploy units, offer support to your allies and decide on what military you are going to need.

Depending on what you choose to do the news will change in the a newspaper you can read (the is how the game tells about all events in the game) which is rather nice, because that makes the overview of the game very good. The game does offer pretty good graphics all though it isn't really needed for a game like this. But is definitely a plus.

This rare Vietnam wargame has 4 options: play 2 battle scenarios or 2 general war scenarios where you make decisions as US President Johnson or President Nixon. F1-F4 control the realtime movement speed. The game is pretty hard to get into in my opinion, because of the non-intuitive interface and tough AI, and so is recommended only for hard-core wargamers.. and rare game collectors :) 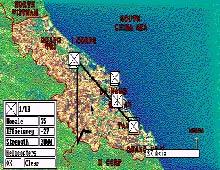