Mortal Coil is an innovative first-person squad-based real-time strategy game that plays like a poor man's version of Rainbow Six (years before that game was released). The year is 2005. "Mortal Coil" is the code name of a covert agency of crack undercover mercenaries who are funded by first-world governments. Its role: to investigate a series of sabotages and terrorist attacks on key research installations. Your prerogative as an elite team of this agency is to find the terrorists and terminate them. Naturally, things are not as clear-cut as they seem, and as you progress from one mission to the next, you will learn more about the nature of your adversaries and what their agenda really is.

The game looks like a first-person shooter, except it is more of a strategy game the way Space Hulk is. A neat waypointing system allows you to give precise marching orders to your 4-person team, and strategic commands let you issue organize how your team move about the environment (e.g. doors, corners, t-junction), and how they react to enemy sightings. You can tell your team to search the area, avoid combat, guard a location, investigate or ignore doors, and collect or ignore bonus items. The AI of computer-controlled teammates is decent, although they are far less effective than controlling them yourself. Similar to Space Hulk, you can view the action from all four agents at once by choosing the four-way split-screen view.

With 11 decent, but not very exciting, weapons to find and use, 18 different types of enemies, and 7 varied and long missions, Mortal Coil should give fans of squad strategy games at least a few hours of fun. Drab graphics, repetitive level designs, and the lack of a fleshed-out storyline (something Space Hulk has in abundance) degrade the game to become a merely "decent" game as opposed to a great one. If you like Rainbow Six and similar games, this is worth a look - just don't expect to be surprised. 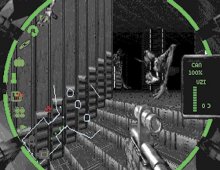