One of the most unique computer games ever made, Millennium Auction is a fascinating "auction simulation" that is set in the year 2006, but it could very well have been at modern-day Christie's - it seems that the "2006 AD" premise is there only to justify the streamlined bidding methods, and explain the presence of fictional works of arts that you will be bidding on, i.e. works created after the 20th century (although there are many real, historical items presented in the game).

Anyway: unlike the 20th century, in 2006 there is only one auction sanctioned by the "World Body government", which only certain Authorized Bidders are allowed to participate. You have your choice of seven characters to choose from, each with his or her own agenda. The goal of the game is to leave the auction with the highest net worth of all your competitors. You do this by repeating the process of winning auctions and then selling the objects you won at a higher price than your winning bid. Of course, this is not as easy as it sounds, since you are competing against four other Authorized Bidders (can be human or computer-controlled) who share the same goal (although not necessary the same strategy).

Information is handled through a futuristic virtual reality interface called "InfoLink," where you can register for the auction and find out about the latest prices for items in the auction. Once you register and enter the auction house, you have your choice of starting the bidding or scavenging for information by gossiping with other bidders, or read and watch the news. As in the real world, world events can effect the value of the items for sale. A political uprising to a tsunami could raise or lower the value of a work of art, and so you must keep abreast of world news to maximize your profit. You can browse the catalogue of the artwork that is up for auction before the bidding starts. Each auction features 12 items, ranging from genuine works of art (a Van Gogh or Renoir painting, for example), to the satirical (Bill Clinton's saxophone from his 1992 presidential campaign), and finally to the wholly fictional (a sculpture made in 2004). Each auction has three rounds, so four items are bid on per round. Needless to say, it's much more difficult to gauge the value of a fictional item than a real one, and the game has more than a few "red herrings" - worthless objects that can fool you into spending a lot of money on, only to discover their true (low) value later when you try to sell them. Your opponents may also give you false information, so since you have limited funds, it's very important that you cross-check all available sources to determine which objects among the 12 are the most valuable. Not only do you need to consider the worth (and the future worth) of each item, but also how much you can afford the work. Some works also sell better as "groups", so purchasing selected pieces to sell together later is one way to make a killing in the game.

Overall, Millennium Auction is a refreshingly original strategy game that is a lot of fun, especially when you play with friends. The game's good descriptions of many real works of art make it an educational title to boot (although sometimes it's hard to tell the "fake art" apart from the real thing). If you are in a mood for a "lite" and unique business strategy game, check out this rare old game. 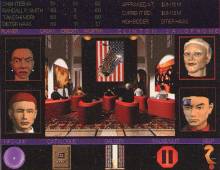