Midway: The Battle that Doomed Japan

This game simulates the naval Battle of Midway in 1942 where the United States Fleet and naval air forces defeated the Japanese Invasion fleet that was heading towards Midway Island. Play as either the Americans or the Japanese. It's an excellent simulation of the old battle if you don't mind PC speaker beeps and CGA graphics. General Quarters also did a few other games that year, of which Pearl Harbor was quite good. 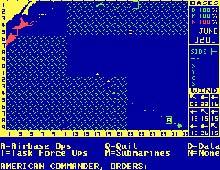