A boring precursor to Impressions' vastly improved High Seas Trader, Merchant Colony is an 18th century trading game that suffers from the same syndrome that characterizes all Impressions games of that period: long, tedious lists of statistics presented in static screens. You can set sail and recruit settlers to explore the New World, but very limited options and bland graphics seriously erode long-term play value. Fun for a while, but it really doesn't stand up to other, better games, such as Holistic Design's Machiavelli The Prince. 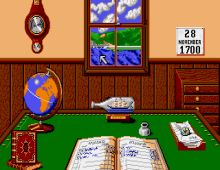 People who downloaded this game have also downloaded:
Machiavelli The Prince (a.k.a. Merchant Prince), Syndicate Wars, Exploration (a.k.a. Voyages of Discovery), Master of Orion, Mega-lo-Mania