Exploration (a.k.a. Voyages of Discovery)

Exploration is a fun game of 15th ? 19th century era of exploration from Interactive Magic. Earlier released in Europe by Black Legend as Voyages of Discovery, the game attempts nothing that we haven?t seen before since the days of Seven Cities of Gold or Colonization: a combination of trading, exploration, war, and economics elements set in the age of exploration. But it does add a lot of complexity to the familiar formula.

You can play against up to four computer or human (via network options) opponents. The main goal of this game, as is in most strategy games of this kind, is to either annihilate or do better than your opponents. In Exploration, this is accomplished by exploring the world with sailing vessels, finding other neutral civilizations and either conquering or befriending them, and developing a good economic base by trading with these new alliances. War is also another option, but one that should be avoided at all costs because it tends to reduce your meager assets. Success in the game relies on laying efficient and profitable trade routes between your colonies and your home port. As time passes, new and bigger ships become available for you to lay longer routes. You can also send expedition groups on shore?these units have the ability to either conquer or befriend the natives they meet. Random elements such as disease, starvation, and fires must also be dealt with. After you have founded a few colonies and established some trade routes, the game becomes quite repetitive and there is no ?meta-goal? (such as declaring Independence in Colonization) to alleviate the tedium.

Another weak point in Exploration is the tedious user interface that forces you to click on multiple screens to get to the option you want. There are not many shortcut keys you can use to jump quickly to common actions, and the graphics are for the most part too drab and blocky. One of the game?s few redeeming values is the relatively high replay value thanks to random maps, but this isn?t much help when the game as a whole is rather repetitive. The bottom line is clear: try Exploration only after you have played just about every other historical trading game. Only an average rating for this one. If you like extensive micro management, however, this game is well worth a look. 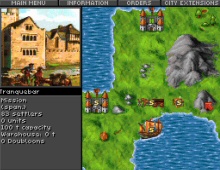 Exploration (a.k.a. Voyages of Discovery) screenshot

People who downloaded this game have also downloaded:
Settlers II Gold Edition, The, Fragile Allegiance (a.k.a. K240), Imperialism 2: The Age of Exploration, Evolution: The Game of Intelligent Life