Meander is a good PC version of an innovative abstract board game from The Netherlands. Frequent visitors may wonder why I decide to review a freeware game that in my opinion does not merit our "top game" tag - the answer is that I think the concept is worth more attention even if the execution is flawed. Besides, fans of abstract board games may want a copy of the real thing because of the game's tactile quality and unique physics-based premise.

The Meander board game is an abstract tile-laying game for two players. Each player attempts to create paths connecting two opposite edges of the grid-like board, which is really a tray in which you place tiles. The tiles come in four path configurations - cross, double bends, and two kinds of shunt - all four sides of which have are "open." Think of the tiles in Pipe Dreams, and you will have a good idea of what they look like. Players take turns drawing tiles at random and adding them to the board, one at a time. After the board is completely filled up, each player then places five marbles along his edge of the board, then lifts that edge to create a slope. The laws of physics determine the outcome as marbles roll down, through the network of paths created during the game. Your goal is to see all of your marbles travel unimpeded to the opposite side, while shunting or trapping your opponent's marbles in cup-shaped curves with no exit. The player with the most marbles on the opposite edge of the board wins the game. Although it sounds too simple, Meander actually requires some thought. Since the first tile is placed in the center of the board and all subsequent tiles must touch a tile "in play," there are tactical decisions about which areas of the board you want to open up, and the order you want to do it.

This minimalist PC version by ID Gaming has one big advantage over the board version: the balls behave much more consistently, since their behavior is dictated solely by "pure" laws of physics (gravity, momentum, etc.) without imperfections inherent in the board version (e.g. the angle you tilt the board naturally affects the balls' course as well as their speed). But unfortunately this PC version does not change the game's biggest flaw: the fact that the game's cool physics-based rules matter only rarely: marbles tend to go along predictable courses that hardly differ from the shortest path you might expect from a flat board.

Meander is one of those few original games that you really want to like, but really cannot due to flimsy gameplay. With more rules and variations, it will definitely merit our top game tag. As it stands, though, it is just a curious little coffee-break game that is worth a look more for the original premise than actual fun. 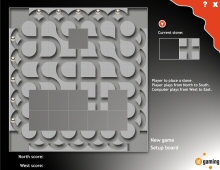