Maelstrom is yet another game in which you must colonize a struggling planet and defend the planet from those who would force their own agendas upon it. The plot is quite simple but interesting: you control the planet of Harmony, the last bastion of civilization against the planet of the 'Zokbar J' and the 'Syndicate' of planets it has created. Being inclined towards conquest, it naturally wants you as part of the Syndicate too - but despite your peaceful nature, you have other ideas.

The game starts off with you establishing your position on Harmony, eventually converting resources to weapons and other defences to repel your conquistador neighbour. Maelstrom begins introducing plot elements and combining the strategy with an adventure-style game - similar to what Cryo Interactive did with the original Dune, but in a very different style. The game doesn't really have its 'own' interface, borrowing from a number of other games to construct an interface suitable for its format. Echoes of Civilization, Dune 2, Utopia, Wing Commander and even Alpha Centauri exist here, even though Alpha Centauri was created after Maelstrom. The game perhaps goes into more detail than many similar titles, sometimes to the detriment of narrative thrust.

Maelstrom has quite nice graphics and sound, especially considering its release date of 1992. Of course, it's not going to compare to the latest space strategy games available, but at four megabytes, who'll worry if they install it on their hard disk? PAS Systems borrowed the good points of other game systems to make a good game of their own, but it doesn't quite ring true. Imagine Mitsubishi borrowing the good points of Ferrari, Lamborghini and Mercedes-Benz to make their own performance car. It'll be a solid vehicle, but never hold the charisma of the other names.

Maelstrom is a good example of a great game concept marred by poor execution. As "overlord," you must transform a planet's mining-oriented culture to a war-oriented one. The game has many strong points, e.g. the innovative personnel management, a strong non-linear plot with many optional sub-plots, and intriguing espionage model. Unfortunately, they get buried beneath a cumbersome interface. Bear with its idiosyncracies for a while, though, and you'll find a decent game lurking underneath despite all the micromanagement and tough time constraints. 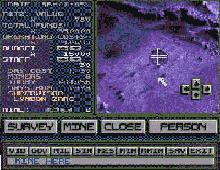 People who downloaded this game have also downloaded:
Master of Magic, Machiavelli The Prince (a.k.a. Merchant Prince), Magic: The Gathering, Syndicate Wars, Master of Orion