LOA2D is a great computer version of Lines of Action, a fun but little-known abstract board game invented by Claude Soucie and described in the book "A Gamut of Games" by legendary board game designer Sid Sackson. The game is played on a typical 8x8 checker/chess board, starting with each player's 12 pieces lined up on 2 opposite edges of the board (the corner tiles are not used). The rules of the game are roughly as follows: Black moves firstEach turn, the player to move moves one of his pieces, in a straight line, exactly as many squares as there are pieces of either color anywhere along the line of movement. (These are the Lines of Action). You may jump over your own pieces. You may not jump over your opponents pieces, but you can capture them by landing on them. Captured pieces are removed from play.The object of the game is to turn your pieces into one connected unit. The first player to do so is the winner. If both players reach a winning position at the same time, then the game is a draw.

Lines of Action is a game that is easy to learn, but complex enough to be interesting. LOA2D brings the game to your PC screen with good graphics, challenging computer AI, and adjustable difficulty level. If you like abstract strategy games, LOA2D is well worth your time. I recommend digging out that old checkers board and pieces and get someone to play it with you, though - the thrill of beating a real player is always greater than beating a computer play, no matter how competent it may be ;) 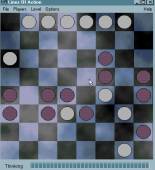