Line in The Sand

"A faithful adaptation of GDW's boardgame, this simulation was not an accurate representation of the Gulf War. More akin to a static line World War I battle, it did not prevent it from being entertaining, just from being accurate. Actually, the other scenarios involving potential flashpoints between Israel and the Arab nations were more interesting with their diplomatic and military options; however, the graphics were "utilitarian" (to put it charitably)." 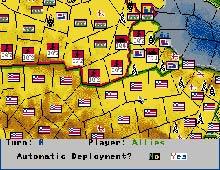 Line in The Sand screenshot