Liberation Army is a unique and compelling blend of real-time strategy, tactical planning, and shoot 'em up from Japan. Your objective as an army commander is to defeat the computer-controlled opponent by leading your "mechs" and spaceships in huge space battles. The game is a clever blend of turn-base and real-time strategy: every battle consists of two phases, the "Armament Phase" and "Combat Phase." In the Armament Phase, you can take as much time as you want to prepare your forces and recoup losses from the previous battle. Here you can save the current game, refill, repair, upgrade, and buy new units and battleships. In the real-time Combat Phase, you lead your dozens of units in a sprawling space battle. Here, the game is a fun shoot 'em up, but allows you to give commands to your troops at the same time. You win the battle when you eliminate the enemy or make them retreat. On the other hand, if your units are wiped out or retreat, you lose.

Although it sounds simple and your choices seem too few during the first 2-3 battles, Liberation Army is in fact a deeper and more complex game once you are able to buy more powerful weapons and battleships - in time to face tougher fights which easily involve hundreds of spaceships and mech units at once. For example, units attacked from the back may suffer a "critical hit" that does more damage than normal, and tactical planning is key to winning some of the larger battles: should you attack from the flanks, or lure the enemy in? There are numerous weapons to equip your units with, and a variety of spaceships to purchase. My only big gripe is the fact that you need to 'babysit' spaceships in most battles, since they seem almost incapable of defending themselves. But given the thrill of seeing your dozens of units crush the enemy and cool weapon effects, the game is far from tedious.

If you are looking for a fun and unique blend of action and strategy that is rarely seen outside Asia-bound console games, Liberation Army is well worth your time. Originally released in Japanese only, the text has been translated into English by the translation group AGTP, so you can download the patched version plus English manual here. 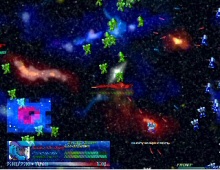 People who downloaded this game have also downloaded:
Kingdom at War, Fragile Allegiance (a.k.a. K240), Panzer General for Windows 95, Lords of Magic: Special Edition, Machiavelli The Prince (a.k.a. Merchant Prince)