Knight Exchange is a fun and quite unique board game based on concepts similar to chess. In this game, the board is a four by four grid. Twelve markers, each representing a chess knight, are placed on the board, with six white markers placed in the lower right of the grid and six black markers placed in the upper left of the grid. The object of the game is to have the white markers trade places with the black markers in the fewest possible number of moves, with each piece moving as a knight moves in chess. More explanation from the game follows:

"As in chess, each piece can move two spaces forward and one space sideways ("forward" and "sideways" meaning any direction except a diagonal). To move, type the letter of the square that you are moving from and the letter of the square to which you are moving. For example, to move from "P" to "G", press first the P key, then the G key. Don't worry - the program won't allow you to make an illegal or invalid move.

If you get stuck with no possible moves (it can happen!) or you just want to take back a move (or moves), press BACKSPACE. You can use this feature as often as you like, but it costs you a point each time that you do. Enter "S" to toggle the sound on or off, and type ESC to quit (you will then be given the opportunity to restart the game).

Oh yes, a word about strategy. Like chess, mastery of the game requires the ability and concentration to plan your moves in advance. Unfortunately, the authors are both terrible chess players and this fact became painfully obvious in our playtesting. Our best (lowest) score was thirty-two. We don't know what is the lowest possible score, but surely you can better our effort. Good luck! (NOTE: The lowest score attained by BIG BLUE DISK staff members during testing was sixteen.)"

Overall, if you enjoy brainteasers and board games in general, Knight Exchange is well worth a look. The game isn't very complex or replayable, but it's a nice coffee break diversion that you'll enjoy while it lasts. 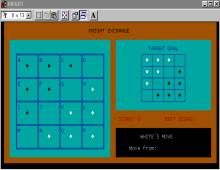