Klondike Moon (later released as Luna Ticks in Australia only) is a lackluster real-time strategy game that features some innovative units, but poorer-than-average gameplay hampered by a cumbersome interface. Set in the future, you play a spacefaring enterpreneur who must grow a mining business on various moons to repay a loan extended by the moons' owner, MegaBucks Corp. Each moon is composed of different kinds of ore, which you must mine using futuristic vehicles called "Tick." You can process the ore in your factory to make either loan repayments or construct other useful items such as defense installations, weapons, or enhancements for your Ticks. Similar to the real world, you are not the only one who's trying to get ahead in the business. Up to 7 opponents, be it computer or human controlled (via IPX network), will not hesitate whenever they have a chance to use "dirty tactics": steal or destroy your manufactured items and installations. Your overall goal in the game is not to make money: you must race against other players to be the first one to pay off your loan, then discover and access the wormhole.

Computer players in Klondike Moon are quite competent. A neat feature of the game is that you can choose different strategies for computer-controlled players to follow, although they all seem to follow a the "tank rush" tactic after a while. In addition to an 8-player game via IPX, the game supports two players via a serial connection (modem or cable). Unfortunately, what innovations the game has are obscured by a very cumbersome interface, full of obscure menu icons that look too similar to each other and are not readily accessible. And while piloting a bug-like Ticks can be fun, the novelty wears off after a while - at which point you will discover nothing in the game that will keep you playing for moon after moon. For a great sci-fi business game, M.U.L.E. is still far more fun and engaging. Thumbs down for this very average old game. 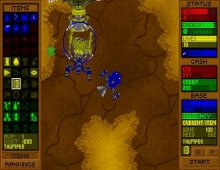