PC conversion - or better said - remake of the good old C64 classic of the same name by Ariolasoft. Well, the C64 game from 1984 was one of the first games of its kind followed by games like Die Fugger, Vermeer, Hanse and so on. Kaiser is a typical historical management and trading sim with the usual military aspects. Your aim: becoming "Kaiser" of the "Holy Roman Empire of German Nation" (er, rough translation). Nowadays the genre doesn't look too appealing anymore, but for some nostalgic moments, you might give it a try. But then, as it is a remake the nostalgic value shouldn't be very high.

Note: the original German game has been translated manually into English except some menu items. You can still download the German original below, as well as the German manual. 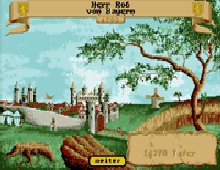