History Line (released as The Great War: 1914 - 1918 in the US by SSI) is a World War 1 tactical wargame based on an improved and modified engined used in Blue Byte's earlier Battle Isle games. It is one of the few tactical World War 1 wargames to be made for the PC, and is a fun and enjoyable game, although shortcomings and awkward controls will take a while to get used to.

When the game starts, you see the Main Menu, and can change some of the options and the keyboard controls (the game also supports the mouse), and also enter a map code if you have unlocked hidden maps. Starting a new game, you can choose to play the Allies (France) or the Central Powers (Germany). The game starts with a battle in August 1914, with Germany invading France.

Every two months, there is a battle, for a total of 24. You also are encourged to try to preserve your units, for they will gain experience and become more powerful. The game is unique in having a split screen -- one side plays on the left side, and the other on the right. While the computer or the other player (History Line supports 'hot seat' play) is making their moves, you can also make yours on the other side. With the exception of different units or new maps, there is not much of a difference to seperate the two sides. Once you finish the game as one side, there is not much incentive to play the other.

The objective in History Line is simple -- in each battle, destroy the other sides army or take their HQ. Each turn is divided into two phases -- the Move Phase, and the Orders Phase. In the Move phase, you plan your moves, and then both sides move at the same time. In the Orders phase, you plan your attacks, then you see the results in a short graphical clip (which can be turned off once you get bored with them). The battle continues in this fashion until one side or the other is defeated. There are also depots and factories that start of either on your side or netrual. If you occupy them, you can 'use' units that are in them, as well as repair damaged units if you have enough energy points left. Units vary and are historically accurate, ranging from Infantry to Cavalry to various kinds of Artillery. However, they don't need to be resupplied, which reduces the historical accuracy of the game somewhat.

The graphics are simple VGA shapes and design, old looking but still pleasing to the eye and you can see everything clearly and recognize a unit from its graphic alone. The music and sound effects are good but get tedious after a while. One of my biggest complaints about the game is the controls. They are awkward, to say the least. To get a unit to do anything, you place the cursor over it and hold down the mouse button, which brings up a 'X' over the unit. Then, you move the mouse in one direction or the other to excute orders -- down to bring up information on the unit, or up to move it, for example, and then let the mouse button go to excute it. Slow, tedious, and awkward. You also do the same thing to switch from one mode to the other. Bringing units out of depots, factories, and your HQ is a similar process. You also need to press F1 to actually CONFIRM that you are ready to go on, and the only time you can save is by pressing the right key DURING that confirmation phase! Needless to say, you will HAVE to read the manual before you play this game. Its too bad, really, because besides the controls and the keyboard, the learning curve is not that bad.

In summary, this is a fun tactical wargame, unique for being one of the only ones to be set in the First World War. There is not a WHOLE lot to make this game stand out from other tactical wargames, though, although it is historicaly accurate for the most part and challening to play. Once you get used to the awkward controls, the game keeps you interested until you finally give up or finish the game on your side. However, the replay value is quite low, although playing with someone else can lengthen it. Overall, a good wargame for it's day that doesn't stand the test of time too well. Interesting, but probably will appeal only to casual wargamers.

Bonus -- by pressing ESC key a couple of times, you can bring up a 'History Lesson' in which the game shows what was going on in the world -- war releated and otherwise -- for the two months that are covered in the battle you are currently fighting. This is not mentioned in the manual, and is a nice touch, so I thought I would mention it. :) 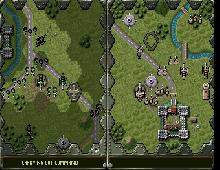