In the Days of Knights and Kings

In the Days of Knights and Kings is an interesting early strategy game that depicts the events leading up to, and including, the famous Battle of Hastings in 1066 AD that saw William of Normandy crowned king of England. The game casts you as advisor to Harold, the reigning monarch, and the computer plays William. In a nice twist to conventions of turn-based games, the winning conditions for both sides are different: you will win if you either accumulate 60 points, or kill William. You gain points by conquering cities and collecting taxes from them. William, on the other hand, will win if he can successfully crown himself (to do that, he must get 30 points, reach London, and kill Harold). Another interesting element in the game is that you must answer one or more multiple-choice questions at the beginning of each turn. These questions pertain to factoids about the Middle Ages (e.g. "which of the following people were heir to Stephen's throne of England?"). Incorrect answers result in a loss of movement ability during your turn.

In addition to Risk-style gameplay where you move units to conquer various cities across the map, you can use spies and move Harold around the country to attract militia (only if the town he visits supports him, however). The game, although primitive, is quite fun and polished: there are comprehensive rules, advice, and even a nice glossary/reference section on medieval terminology. It is not as deep as Annals of Rome or Kingmaker, but it's quite a fun beer & pretzel strategy game that warrants a second chance. 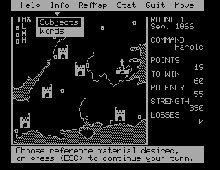 In the Days of Knights and Kings screenshot