Imperial Conquest 2 is a fun wargame where your goal is lead a major nation to ever higher levels of glory over a twenty-year rulership during the 3rd Century BC. There are 16 playable nations, although only five give you a good chance of surviving the entire game (Rome, Carthage, Seleucid, Ptolemic, and Macedonia). No online options, but any number of nations can be human-controlled and then played through Hotseat or PBEM.

Each turn, you move your forces on the map (both land and sea), raise new forces, and engage in battles. City management is simple -- each city has a maxium population, and produces supplies, which are affected by the population and what time of year it is. Since you need supplies to keep your armies going, it makes campaigning in the Spring and Summer the easiest, just like it was in real life. You also see the allegiance factor -- newly conquered cities are more likely to revolt, and the level of fortifactions, as sieges are a important aspect of war in ancient times. Each turn represents two weeks, and there are 12 weeks in a season, so each season you get six turns. The combat screen is also very realistic for the time period -- you position your units and then move them into battle. Choices for your units are light infantry, heavy infantry, light cavalry, heavy cavalry, and archers. You can also recruit mercaneries into your armies. Armies take time to raise, and you can force them into action before they are fully raised if you are desperate.....a nice touch. Another realistic aspect is that when you take a city, you may compel nearby cities to switch sides. Graphics are simple for a Windows game, but detailed enough so you can see what is going on, and you have a smaller window with a overview map of Europe next to the main playing screen, making it easy to use the game's filters or hop around the map. Controls are also very simple -- just the mouse and the keypad. You also have the option of seeing the news each turn and doing diplomacy or handling your taxes.

The game has some major downsides, such as the unrealistic result of battles (entire armies were not often destroyed during ancient times like they are here), no music and very simple sound effects, and the diplomatic options are very limited (hard to end wars, even with massive victories, trading only allowed with three nations, no real concentration of forces for allies). The AI is also quite good at the battle screen but poor on the strategic map, attacking and moving units that make you scratch your head.

Overall, the fact that this game was made by a small company shows. It's a good wargame set in the ancient times, and VERY challenging, especialy if you play one of the smaller nations. A strategic game, though, it is not. Try it out if you like wargames and/or games set in ancient Europe. Once you overlook the game's flaws, you have a fun and addictive game on your hands. Recommended. 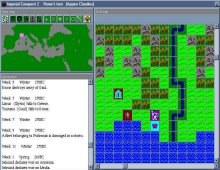 People who downloaded this game have also downloaded:
Imperialism 2: The Age of Exploration, Imperialism, Fragile Allegiance (a.k.a. K240), Panzer General for Windows 95, Master of Orion