Hill Street Blues is one of the very few games that I have seen which is based on the very popular police series. You start each mission with that your police officers get a short briefing. After that you get your men out on the streets and you have to see if you can control the things in town.

Your officers can do a lot of different things like using their gun, driving in a police car, use handcuffs on people and several other things. The graphics are ok, and the city sound in the game gives a good atmosphere, so you actually feel you are in a real big city. The only two things that really takes the game down is the lack of action in the game and the poor controls.

Hill Street Blues is a lackluster simulation of a policeman's routine from Krisalis. Despite an ambitious premise, the game falls short of expectations due to poor interface and the fact that it makes you do far too much in far too little time. The description at MobyGames says it well:

"Based on the '80s TV drama series Hill Street Blues, this game puts you in the role of Captain Furillo of the Hill Street police department. Crime rates are soaring in the precinct, and it's up to your team of nine officers (all well-known from the series and with digitized portraits) to keep the streets safe.

Your officers move on foot or by car on a 2D top-down map of the city, complete with real-time traffic. True to the series, each day starts with a roll call from Sgt. Esterhaus. Once on duty, listen to radio operator A.J. Hill report crimes every few minutes. Deploy officers to the scene, help the victim and call an ambulance or coroner; next, identify and find the suspect. Some criminals may flee, others even shoot at you. Give chase or open fire if necessary. When the bad guy is arrested, a court trial may follow.

Hill Street Blues is controlled entirely with the mouse via a set of icons - that's everything but intuitive, especially when directing a single officer through the streets. Since there will soon be multiple crimes all over the city, the challenge is to co-ordinate multiple officers simultaneously and keep track of cases and suspects. If your success rate is high enough, you will ultimately be promoted to chief of police."

If you are interested in "police simulation" games, I'd recommend the superior shareware game To Serve and To Protect (reviewed on this site) over this disappointing game. 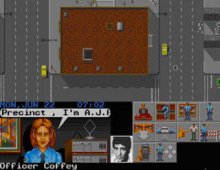 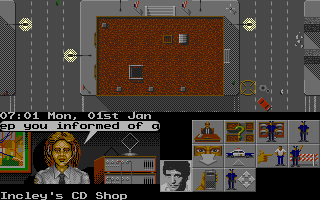 People who downloaded this game have also downloaded:
To Serve and To Protect, Crime Fighter, Imperium Galactica, History Line: 1914-1918 (a.k.a. Great War: 1914-1918, The), Imperialism 2: The Age of Exploration