Heirs to The Throne

A solid medieval conquer-thy-neighbor game, this game features excellent AI and a good balance between economic and military options. It is similar to Impressions' Lords of the Realm although the focus is on strategic rather than tactical level: you allocate resources and production to conquer one province at a time. Random maps guarantees replayability, but the game ultimately suffers from non-intuitive interface and the too-abstract focus. 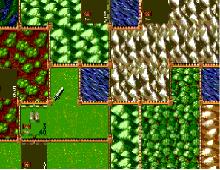 Heirs to The Throne screenshot