Hammer of The Gods

One of the best and most original turn-based strategy games ever made, Holistic Design's Hammer of the Gods is an addictive empire-building game set in the world of Norse mythology. Despite it being based on the improved version of the engine used in Holistic's earlier cult classic Machiavelli The Prince (originally published by QQP as Merchant Prince), Hammer of The Gods nevertheless remains relatively unknown. We may never know why the game disappeared so quickly from store shelves (weak marketing campaign and deluge of great games during that year (1995) being plausible culprits). One thing is for sure, though: Hammer of the Gods is one of the most underrated strategy games you won't want to miss.

A cross between history, myth, and pure fantasy, Hammer of the Gods puts you in charge of a Viking clan. As a Viking worthy of his name, you must invade countries, plunder cities and fight your enemies -- all in an attempt to please the Gods and win Odin's favor. You can choose to play a tutorial scenario, a short mode where you must complete twenty quests to win, or the full-length campaign where only completion of Odin's final quest will achieve victory. Multiplayer options (Play-by-email, four players on a network, or two players on serial link) are also available, although they are somewhat limited and sluggish.

Four races are present in the game: the Humans, the Elves, the Trolls and the Dwarves. In order to complete Odin's final quest, each race has victory conditions. The Humans must possess magic weapons, the Elves must control a fixed percentage of the population, the Trolls must control a large army and the Dwarves must own a large amount of gold. Similar to its spiritual predecessor Machiavelli The Prince, each turn in Hammer of the Gods is divided in sequences of play. You may receive messages from other players or reports about attacks, choose the next quest (after one is completed), move units and fight, send messages to establish diplomatic relations, resolve attacks by garrisons from nearby enemy castles, and finally be informed when a quest has been completed. Diplomacy will allow you to establish treaties for peace and trade. You can suggest peace, declare neutrality or war, and concerning the economy, you can offer limited, partial or full trade, or barter for specific goods.

Combat screens are similar of Heroes of Might and Magic, i.e. chess-like and played from a side-scrolling perspective, although the number of units you can control is limited. Units are usually made of Viking archers and swordsmen, but depending which race you chose at the beginning, other units will be available such as Berserkers for Humans. There are also heroes unique to each race, and other special units you will receive when completing a quest.

Quests, which make the game stand out from the crowd, are undoubtedly the best feature of the game. Given by Norse Gods, they vary from easy to very challenging. The easiest will be to give one of your daughter in marriage to a God, or find and raid a monastery. For more powerful gods, you must fight skeletons, giants and even a dragon or conquer several cities. Rewards are important as they provide you with magical weapons or spells, special ships and powerful creatures like wizards, drakes and giants. Naturally as you work your way up toward Odin, the most powerful God, quests become increasingly more complex and require you to juggle a fine balance of military might, economic prosperity, and diplomacy to succeed.

Overall, I find Hammer of the Gods to be one of the most refreshing turn-based strategy games ever. It plays like a cross between Machiavelli the Prince and Heroes of Might and Magic within a unique setting that is well taken advantage of. Definitely a forgotten classic that deserves a second chance!

Note: This is the full game minus voices. Please note that the game requires VESA 1.2 compatible driver. 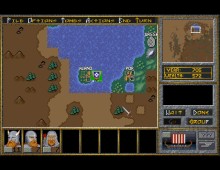 Hammer of The Gods screenshot

People who downloaded this game have also downloaded:
Lords of Magic: Special Edition, Machiavelli The Prince (a.k.a. Merchant Prince), Master of Magic, Lords of The Realm 2, Emperor of The Fading Suns