Good Neightbors Solitaire is a catchy little solitaire, in which the objective is to pair off and remove all the cards in the 52-card deck. You can remove any pair of cards of the same rank, provided they are adjacent (neighbours) to each other either horizontally, vertically or diagonally. Once you have removed at least one pair, you can click on the "SHIFT" button. The cards remaining in the layout will shift to the left, and then up. Any spaces left at the end of the layout will be filled with new cards dealt from the deck. You can continue removing pairs until the entire deck is taken. If at any turn no matches can be found in the layout, the game is lost. Fun, entertaining, and relaxing, this little gem is fun to while away some 5-10 minutes of your free time with, although it is probably too easy to pose a real challenge for puzzle experts. 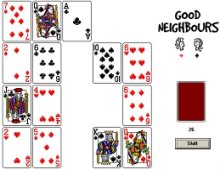