Four Corners Solitaire is a fun solitaire game that takes its name from the opening layout, in which each suit is assigned its own exclusive corner on the table. Each corner has an Ace in the middle, surrounded by four random cards. Look for dueces anywhere in the layout and place them on the appropriate aces. Then look for 3s that go on the dueces, etc. Once you have finished building upon the aces from the initial layout, proceed to go through the deck in the middle of the screen. Your objective is to clear all the cards - to end up with 4 stacks of cards, one for each suit, arranged from Ace to King.

The game is both fun and challenging, because both luck and skill are required. You can use any of the empty slot near the Ace to "park" a card for use later - but it must be of the correct suit (e.g. 5 of Hearts can only be parked at the Hearts corner). The game is easy to learn, and not very difficult to solve - largely because you are allowed to go through the deck twice. Overall, an enjoyable solitaire to play during coffee breaks at work. For a more challenging solitaire game, check out 35 Card Solitaire on this site. For an easier one, check out Good Neighbors Solitaire. 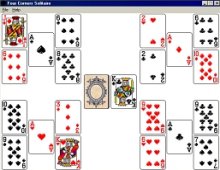