Choice is a great freeware PC version of an excellent dice game designed by Sid Sackson, of Acquire fame, first included in his A Gamut of Games book and later released as a board game by Hexagames.

This PC version is the multiplayer version of Choice (also sold as Solitaire Dice in the board version). Basically each player take turns rolling 5 dice. After you roll the dice, you choose two pairs and add the spots of each pair. Both the sums and the remaining fifth die (since you have already chosen 4 = 2 pairs) are then recorded. The sums gives you points, while the fifth die determines the end of the game. The purpose of the game is to score as high as possible before the game is over. You may only choose three different numbers as fifth die during the whole game. As soon as three different fifth dice have been chosen, you must take one of them as fifth die during the whole game. If none of your fifth dice is among the rolled dice, you get a free roll. The only difference between a free roll and a normal roll is that no entry in the fifth-die-column is made: a free roll entitles you to score two extra sums without the penalty of recording a fifth die.

Although it sounds complex, the game is actually quite simple and fun once you get a hang of it. Your best strategy is to choose as many sum as possible to score high points—the more you can do that for over five times, the better your score will be. The combination of luck and strategy, like most other Sid Sackson games, makes Choice a fun game to play against friends, or even by yourself against the computer. If you enjoy abstract strategy games, Choice is well worth checking out. 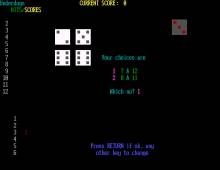