ML Shut the Box is a solid version of a classic dice game of the same name. Basic rules are as follows: players (up to 6 allowed, any of which can be computer-controlled) take turns rolling a pair of dice. They then select digits from 1 to 9 that total the same number as the dice. Once a digit is selected, it cannot be used on subsequent rolls in the current round. When the player cannot select digits totaling the dice roll, the round is over. The player scores points equal to the sum of the digits used that round. If the player successfully uses all nine digits, they get five bonus points for a total of 50 points for the round. The game consists of five rounds and, naturally, the player with the highest score wins.

Like other games from Bob Lancaster, ML Shut the Box is fun, intuitive, and a lot of fun especially when you play with friends. If you love dice games or simple strategy games where both luck and skill are required, ML Shut the Box is well worth your time. 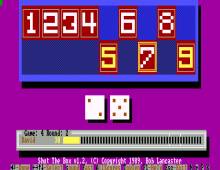