Global Domination is an awful multiplayer real-time game of world conquest that is bogged down by very confusing interface and boring display of bland statistics that most Impressions games suffer from.

The gameplay most resembles boardgame RISK, but with clunkier graphics and almost indecipherable interface. You can choose to play against real-world opponents a la classic Ancient Art of War, although you wouldn't be able to tell if they use different strategies or not, since the AI is generally bad. Revolutions add some excitement to gameplay, but overall, there was little of innovation or graphic appeal to sustain this on anyone's hard drive. For a better use of this engine, play the semi-sequel When Two Worlds War instead. 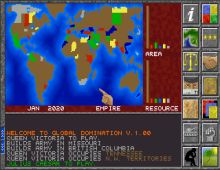