Impressions' conquer-the-universe game that could be considered a sequel to Global Domination, When Two Worlds War is not your typical divide-and-conquer game, although it still suffers somewhat from Impressions' "Excel spreadsheet overload" syndrome evident in their early games.

The game offers quite a few innovations, although its lack of diplomacy, trade, or planet development elements make it a straightforward war game that is more limited in scope than typical 4X games. For starters, the game can be played in either real-time or turn based. Real-time, naturally, adds an element of excitement to the game as you frantically scramble to build defenses before the opponent attacks. For those who find real time play too quick, there is a pause button, as well as the option of turn based combat. Combat can take place in space or on either planet, adding new issues for you to confront when formulating your master plan Another excellent feature is that there are no restrictions on unit types: if you want a unit that does not exist, all you have to do is design and build it from the ground up, using a wide variety of components.such as body, weapon, engine type and more. You can create craft capable of transport on land, sea, air, space, or on all of these. Of course, with limited resources and time, you need to decide whether to go after that wonder-craft right now or to build a few more tanks first.

The interface is also quite unique. Although it still looks as boring (rows after rows of obscure buttons) as Impressions' earlier games, it is much more functional and unobtrusive. Impressions even includes a comprehensive on-line tutorial that walks you through the interface and basic gameplay elements. Another new feature in When Two Worlds War is that it allows the voice recognition capabilities of the ARIA soundcard to allow players to control the game via spoken commands (similar to Access' Echelon). I've never tried this feature as I never owned this soundcard, but I heard the results are adequate.

As with most sci-fi conquest games, one must develop new technologies to gain the upper hand on one's enemies. However, here you have much more freedom due to the excellent ship design module mentioned above. In addition, you can also use a simple programming language to program different action libraries for your units. Preset libraries include Patrol NW, Bomb Mines and more. These libraries, unfortunately, make it very easy to beat the computer player, whose intelligence is not much better than in Impressions' other games (which is to say, it's dumb as a rock). Fortunately, you can play against a friend over a serial link or modem.

With a host of innovations and pleasant graphics, When Two Worlds War is definitely one of Impressions' better games, although its poor AI and cumbersome interface still put it way below Master of Orion in terms of longevity and classic status. Recommended for those who are new at galactic conquest games, or anyone looking for a solid, relatively quick multiplayer game that offers a nice change from longer epics. 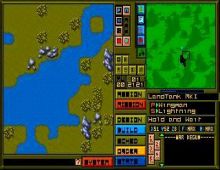