The third offering in the infamous "Micro Miniatures" series, Fort Apache is virtually identical to the previous two releases, Rorke's Drift and Charge of The Light Brigade, except for a different premise and different unit clothes.

The premise is once again the best thing about the game: Fort Apache depicts the exotic battle between the US troopers and the Taco bandits during the Gold Rush of 1880s. You will also have to deal with rogue gold prospectors who are violating the boundaries between US and native Indian settlements. The AI is not much improved from the previous Micro Miniature games, and the muddled user interface is left intact. Definitely not an enjoyable game experience, even with better graphics and many more formation and attack options this time around. 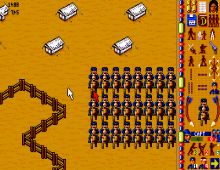