Deadline is a very obscure tactical strategy game in the same vein as X-COM, except with a much more confusing interface. The game puts you in the role of a team leader of a Anti-Terrorist Division (ATD), although you will need to handle more than terrorists. Similar to X-COM but played in real-time, you will control a squad of operatives sent on a variety of missions, from rescue to neutralization of the terrorists. Description at MobyGames describes it in more detail: "Deadline pits you against everything from fanatical cultists (some of whom you're supposed to save from themselves), drug dealers, escaped prisoners, and even a disgruntled MIT professor with a high powered rifle. But terrorists will be your primary opponents in the later missions. Your goal is to rescue the hostages and neutralize the bad guys, but you're also suppose to avoid blood and death on ALL sides. This means that you're not allowed to drown your enemies in their own blood, and the majority of them must be captured alive for you to successfully complete the mission.

Deadline also allows you to communicate with the terrorists (to a limited extent) through use of a vid-phone and negotiation mode. You can also dedicate time to research in order to get more information about the terrorists, hostages, location, etc. The game is very well fleshed out with an extensive history behind each mission. But as the name of the game suggests, there's a time limit and if you spend too much time twiddling your thumbs the hostages get executed and you're fired."

Despite an intriguing premise and innovative blend of real-time strategy and negotiation, Deadline suffers from the same shortcoming that plagues a lot of games: a poor user interface and severe gameplay imbalance. The interface is cluttered with dozens of icons, many of which uncover further command icons as you click on them. This is poor design to say the least - the designers could have taken a cue from X-COM's elegant and powerful interface. Instead, it takes a lot of time to execute even the simplest of commands because the interface gets in the way - something that is a big problem since everything happens in real time.

The game also suffers from bad gameplay balance - or lack thereof. In later missions, you are often faced with near-impossible odds, and research sometimes take far too long to leave very little room for error. A lot of missions therefore have a "puzzle" feel to them, much like the harder missions in Jagged Alliance: you have to use the right route and execute the right commands at the right time to beat the mission.

So in the end, a cumbersome interface and gameplay imbalance more than outweigh the good points of Deadline. It would be nice to see new games utilize the game's innovative concepts such as negotiation and the element of research, though. As it stands, the game is worth a look for the first few missions, then you will likely go back to Sierra's SWAT 2 or X-COM series. An unfortunate "missed opportunity" for Millennium - a UK company known for good strategy games. This was also the last game they developed before going out of business. 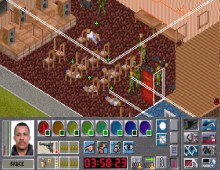