Constructor is a fun, tongue-in-cheek business simulation in the same style as MicroProse's early classic Pizza Tycoon. Essentially, Constructor takes the empire building and resource management of the best simulations and adds to it a strong dose of character interaction, humor, and strategic competition. Take the role of a real estate developer in a race to build up and manage resources, properties, environments, and human interaction, while trying to outperform and destroy rival development firms.

The game is played from an isometric perspective, with you looking at the town and people milling around in it, similar to SimTown. You need to build houses and facilities to get your raw material like wood and concrete. While playing you have to get rid of whining tenants, cucarachas, your opponents and their attacks to destroy your buildings. There are a total of 40 different structures that you can create in the game. These range from steel mills and pawn shops to more elaborate structures like police stations and mansions.

What makes Constructor a lot of fun is the quirky personalities of people in the game. Similar to many Bullfrog games such as Theme Park, people in Constructor are a nitpicking lot. Tenants require a constant attention from you. If they don't like something or are unhappy, they will complain and cause you to get black marks if you don't tend to their needs. If you get really fed up with certain tenants, you could raise their rent or simply kick them out. This can cause negative things to happen. For example, if you kick a tenant out who is not too happy, they may damage or destroy certain parts of your property on their way out. To make things more complicated, you always have to watch your back (and your land) for sneaky competitors who will try to sabotage your business... by setting fires to the houses for example.

As good as the single player game is, the game also offers excellent multiplayer options. Up to four people can compete, making resources and time management more important than ever. With a twist of humor and well-balanced gameplay, Studio 3 has created a real old game in Constructor. The economics model is sound, and the gameplay always fresh, funny, and engaging. Highly recommended, especially to anyone who enjoys Pizza Tycoon or Bullfrog's games.

Constructor by Acclaim Entertainment Inc. is an interactive strategy game that came out in 1997. If you download Constructor, you will realize that this game is similar to SimTown in the fact that it you have to build a city up from scratch. Game play in constructor is simple. When you start the game, you must choose one of the few towns that are listed and you can also choose whether or not to use the computer as opposition. You build up your town by building homes for tenants to live and create families in, build hospitals to heal the sick, schools to make the kids smarter so you can create the most economical workers for your town, and a lot of other things that will create jobs and revenue for your town.

You can even do things like build biker headquarters and have a biker gang on your side to scare people into doing what you want them to. For example you can have the biker gang go to an enemy's construction site and scare them away. You can build an apartment building and let it become overrun with hooligans that you can unleash on your opponent. You can even use hippies and squatters to go and make your opponent really mad too. As you see, the constructor download is a bit special. As with any city, you can have a mob or mafia Headquarters and use them as well. When you do use your mob, obviously you will have to exchange favors with them in order to use them. For example if you do a favor for them, they will and turn do favors for you like giving you access to getting stars that can do certain jobs to cause all kinds of chaos for the opponent. When you have enough money you can even buy off your police department so you can have complete and total run of the streets. When you do this, it makes it easier for you to keep the opponents gangsters and hooligans off of your streets. When you buy off the police in the constructor game, you can build your own arsenal of weapons.

The easy to use menus, simple and colorful graphics and crazy objectives make for very interesting game play. The constructor game is easy to learn and a very fun to play. This game can and will keep you occupied for hours on end so lets download Constructor now, get some food and drinks and have many hours of fun. 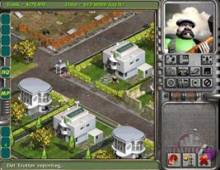