D-Day: The Beginning of the End

Welcome to World War II. On June 6, 1944, as Supreme Axis or Allied Commander, you control the resources and positions available during the historical conflict. Select the Generals under your command: such personalities as Patton, Bradley, Montgomery, and Rommel, based on their actual capabilities. Select from several campaigns to carve through Europe, liberating cities or repulsing attacks. Your arsenal for the war's crucial last year includes aircraft, tanks, and a wide range of weaponry. The game is multi-dimensional, allowing you to maneuver company sized units on the tactical level and yet to play full-screen, high-resolution, real-time battles using miniature tanks, planes, men, and artillery. Special features: Zones of control, accurate field weapons, one or two player mode, fog of war, naval or air bombardment and support, historical personalities and data reports, supply and reinforcements, line of sight, weather, set your own victory conditions, and finally autoplay and quickfight.

The general overview of the game is quite confusing and you have to use a lot of time finding out how the game works and what your different units are. Once you have placed all your units where you ant them and have given them orders as well you can end your turn and the computer will then make it moves and any battles will also be fought.

What I'm a little disappointed about is the graphics used in the game generally because they are very bad compared to the graphics you see between the turns as they are quite could. I know graphics isn't all but from a game made in 1994 they are very ugly and the interface will most likely scare away many strategy game fans. Overall D-Day is nothing special and just another war strategy game in my opinion.

Veteran wargame reviewer M. Evan Brooks sums it up succinctly in his synopsis of this marginal old game: "D-Day: The Beginning of The End is a wargame that portrays the amphibious invasion of Festung Europa, based on The Blue and The Gray engine--- so much so that World War II formations can assume "square". Need more be said as to historical validity? As a gaming experience, it ranked right up there with its history." Disappointing, to say the least, and a thoroughly failed attempt by Impressions to create a "serious" wargame-- something they have never been good at. Steer clear of this one, and play Gary Grigsby's wargames instead. 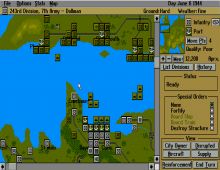 D-Day: The Beginning of the End screenshot

People who downloaded this game have also downloaded:
High Command: Europe 1939-1945, 101 Airborne: The Airborne Invasion of Normandy, Clash of Steel, Battle for Moscow, Crusade in Europe