Yet another game that proves beyond all doubt how great graphics does not automatically make a good game. Ostentatiously a spiritual successor to Cinemaware's Defender of The Crown, Conqueror AD 1086 offers little more than pretty graphics. You get the impression of a hastily-licensed product gussied-up in a spectacular package and shoved out the door to turn a fast buck as best it can. The pity of it is, with some creative redesign and some minor additions to the basic engine, Conqueror could have been a classic medieval strategy game, worthy to inherit the mantle of Cinemaware's masterpiece.

The game starts you off as a you control of a small fiefdom. Once you develop the local economy and raise an army, you have two (not mutually exclusive) basic paths to take: Expand your power and wealth until you're ready to march on London and rip the crown from William the Conqueror's head, or search out and destroy the enormous and elusive dragon that's been scorching the countryside for years.

On the positive side, the game is gorgeous: the scrolling landscapes, dotted with great cathedrals and majestic castles -- russet in autumn, blue-white in winter, and lush with that special "wet-green" pastoral beauty of England in the spring -- are magically evocative, almost Tolkien-esque. But beneath that beautiful surface lies a threadbare roleplaying adventure, driven -- all too often -- by predictable and ultimately annoying arcade sequences.

A prime example of how bad these sequences are is jousting. One of the chief ways to make extra money is to enter, and win, jousting tournaments. To put it bluntly, the "practice" jousting mode is an infuriating waste of time. Mouse control is so impossibly mushy that it reminds me of a scene from one of those God-awful action games where you have to be on exactly the right pixel at exactly the right nanosecond in order to get through a scene. To make matters worse, the mouse-controlled "lance" handles very differently in a real joust than in the practice mode: instead of being squishy and light, it suddenly becomes impossibly heavy and ponderous.

Then there's the matter of castles. To put it bluntly, castle-building is a pain in the ass. Mouse control is so twitchy and unreliable that you'll spend more time "erasing" misplaced towers and wall segments than in actually completing your design. And despite what the manual implies, there's no real reason to waste time and money on a castle during the game's early stages. Reason: there is no siege warfare in the game. To capture an enemy castle, you just burst in through the front door and slaughter the garrison -- as if all those mighty walls and towers simply weren't there at all. These inside-the-castle skirmishes are fun, for a while, since you can collect a lot of valuable loot as you pass from room to room, killing whoever gets in your way. But after a half-dozen or so, they begin to feel as repetitive as the hack-and-slash dungeon crawls in a mediocre fantasy RPG.

To add insult to injury, the economic sub-game, in which you develop your fiefs' resources and bring ever-greater numbers of serfs under your control, is a mess. The total space available for village, farm, and forest development is a single fixed screen. And on the big tactical map, there is no connection between any part of your fiefdom and the main road network of the kingdom -- yet you're encouraged to build roads. Since they do not connect with any other village or trade routes, one can only wonder what their purpose is. The manual doesn't shed any light, either. If you're halfway across England and your home castle is attacked, you can still defend it! When two armies clash, both are sometimes eliminated from the map. This means you can take a castle easily, by sending several small token armies in to get rid of the defenders (whether your armies win or lose), then leading a final army in to attack the now defenseless castle.

With a lot of half-baked ideas that simply don't mesh together, Conqueror A.D. 1086 is an unfortunate game that could have been great with only a bit more polish, Q&A, and thought put into the storyline. When all is said and done, Conqueror A.D. 1086 fails to hold together, and that's a shame. Stay away from this game if you can help it, and go play Defender of the Crown instead. 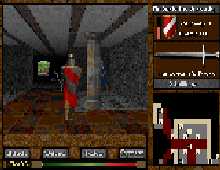 People who downloaded this game have also downloaded:
Lords of The Realm 2, Civil War Generals 2, Castles, Imperialism 2: The Age of Exploration