Based on the engine of Conflict: Middle East, this is, in M. Evan Brooks' words, "A simulation of the Korean War (1950-51) and a hypothetical invasion (1995). Detailed and accurate; but while the Korean War went from massive thrust and counterthrust and back again to a static attritional warfare without maneuver, the program only covered the initial year. Granted that the later years were totally different types of warfare, the lack of historical completeness was disappointing. The interface was noteworthy for its awkwardness." 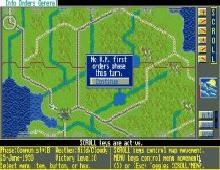