This classic early Avalon Hill game mirrors the board game very well. Take control of a Roman chariot and try to win races and gain glory in ancient Rome. There is a lot of strategy in this game and it may be too much for some, considering that the graphics are early color ASCII. For a simulation of the board game and for lovers of anything Roman I highly recommend it. For others, this game may seem tedious with little reward in playing. 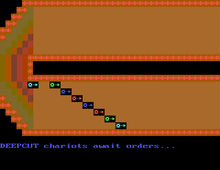