Cohort II (a.k.a. Fighting for Rome)

Cohort II is a significant upgrade of Impressions' earlier Cohort. Aside from an upgrade of graphics (to VGA this time) and gameplay, this version is part of an interlocking game system module with Caesar, which allows the user to "drop down" and play out the tactical battles. The actual implementation of tactics, however, bears no relation to history: often it feels as if you are commanding a squad of World War II units than ancient Romans. Recommended for anyone who wants to delve into Caesar battles in more detail, but definitely not as a stand-alone product. 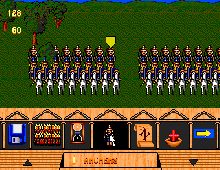