That's what You have to do - conquer the "Old world". You start with one legion in Rome (whose people are very restless in the beginning). The game offers a lot - battles, diplomacy, entertainment for people (arcade part of the game in which You race chariots or fight gladiators)... Each country You attack is represented by it's historical leader and sometimes You may even make them join You without fight! In the part that covers battle you control everything - starting formation of Your armies, their orders, special orders, retreats... Just be careful not to lose leader or Your troop's morale will drop. Great strategy game.

One of my favourite themes in any computer game. Centurion takes place during the time when the Roman Empire was about the rule most of the world. Your mission in Centurion is to build up the Roman Empire further and to conquer the rest of Europe and the northern part of Africa. Your enemies are mostly just the national armies in each country you attack.

During battle you start by use a formation for your infantry (this was what the Romans were very famous for). Once you have given your command the battle will run pretty much automatically but you can interrupt your units somewhat but they don't always react the way you want. While you are attacking other countries you will have to keep the citizens happy with reasonable taxes, setup entertainment and other things. The entertainment can consist of wagon races or gladiator fights where you control one of the people participating (your performance will only have very little effect on the actual game).

You can buy new armies including ships so you can move armies faster to both Great Britain and Africa. You can also get more units and if you manage to get enough money you can actually get a very large army where only few can harm you. The game interface is very easy to use and it's not very difficult to keep a hold of the few options you can do with your cities (there are so few features that it might even had been better if they removed this part of the game completely as it seems unfinished). But the game offers nice detailed graphics and at certain parts of the game the atmosphere is really great like when you have to give thumbs up or down at the end of a gladiator fight.

Overall a great game taking place in one of the most interesting periods of history and offering a bunch of great features and shows how action and strategy elements can be mixed together and still succeed.

This one is one of the games which gave me most entertainment, EVER. Basically, you have to repeat the history of the ancient Roman Empire(so you can guess one of the motives i like this game ;-) conquering the whole europe.

The real cause i love this game, though, is for its sheer amount of details, in battles, for instance, each general has a charisma and a "voice" value, and these influence how the troopers will react to his commands, and if they actually EAR his orders. Of course you won't have only battles to do, but you'll have to take care of your population's morale, and it will be hard to avoid uprisings in many regions of the vast empire you will conquer... at your disposal, to this pourpouse, you will have many shows, two of them will be playable: Chariots and Gladiator Show, adding to this component two "sub-games" that will ease you stress from one battle to the next.

Technically, the game's perfect: graphics are clean, but the most amazing thing is that the sound supports automatically even the most recent of sound cards, truly amazing; download this game, you won't be disappointed.

P.S.: Inside the archive you'll find the copy protection codes, no crack, sorry.

An entertaining game with bits of adventure elements (for example, at some point you'll get to meet Cleopatra and try to-- erm-- win her favor), this game is reminiscent of the old Cinemaware classic Defender of the Crown for its strong emphasis on fun over historical realism. (Not surprisingly, since it's designed by the same designer, ex-Cinemaware Kellyn Beck). As official of the Roman Empire, you must manage armies, calm rebellious citizens, and conquer neighboring countries. Rome wasn't built in a day, but win enough chariot races, and you might be able to do it in a matter of weeks ;)

Another great strategy game. You're the leader of the Roman empire and you lead your army to victory! Defeat Carthago and all other countries around you. Build a fleet, select people from the defeated countries to join your army or build new armies. Use different strategies to defeat other armies. Help your army with fighting. One of the best strategy games I know. A must for all strategy fans.

You're a roman emperor and you have to conquer the world through brutal force but also some diplomacy will come around the corner of the game. The VGA-graphics and gameplay are superb.

This is a decent game. The graphics are fairly basic, but that is the case with most games from that era. The game runs on a map of Europe/Middle East/North Africa set up "Risk" style into individual nations. The game strikes a decent balance between requiring you to manage your empire and getting stuck in micro-managing details. If you like the small details of Sim City or Civilization, you will find a lot missing here.

You start as a minor military commander within the Roman Republic, which consists just of Italy, and a very small army under your command. With this, you can go to neighboring nations and "persuade" them to join you. At first, with your small army, no one will join you except by force of arms. You will have to fight for new territory. But victories in battle and conquering new territories will raise your rank as well as raise tax from which you can expand your army.

You need the larger army to defend your conquests and to have a larger force to confront other nations. If your army is large enough they may agree to pay you tribute in order to keep their nations. If they think they can beat you, they won't agree to tribute and you will have to fight or withdraw. Some barbarian nations will fight no matter how strong you are - they won't back down to you. And there are the rival empires of Carthage and Parthia out there, who may invade your territory.

The management of your empire consists of setting tax rates and providing entertainment. If you are doing poorly in battle or if your tax rates are too high, the people may become rebellious. You can hold gladiatorial games or chariot to make them happier, or lower the taxes.

You judge the outcome of the gladiatorial games. If you judge different than the crowd, you can lose the benefit of the game. But if you judge the way they want you to (you have to guess, but generally the crowd likes gladiators who put up a good entertaining fight and will want them spared). You also can hold chariot races.

The game has you run a chariot in the race, and you can win cash doing this.

You will want to keep your empire happy; as it will increase the prosperity of captured territories and increase the wealth you receive in taxes/tributes (which will allow you to raise more armies).

The most fun in the game is running battles. There is limited control in the game as units generally act on their own and can be slow to change what they are doing when you give them orders. But you choose their starting battle formation and can influence the battle by selecting some units and giving them special orders throughout the battle.

Your legions consist mostly of infantry and to start with this is what your enemies will consist of as well. Differences are that the Parthian and some barbarians are mostly cavalry which move faster than your forces. You will need to get your troops into a formation where you can have multiple infantry units fighting horse units. You get advantages when you can attack a unit from the side or rear and this can help you capitalize on that advantage as horse units can be stronger than your infantry.

The greatest challenge is elephants (found in Africa and parts of the Middle East). They are very tough and can grind over top of a legion if you fight them head on. But if you can wound them and make them run away, they can trample enemy units in their path. You also can build ships to transport your armies and can engage in sea battles. After a few times through the game I played it mostly to run land battles which remained the most enjoyable element of the game for quite some time.

It's the best game ever made! I highly recommend downloading it immediately! You'll be satisfied and impressed! 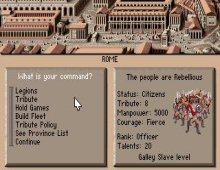 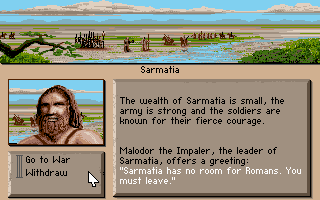