Cohort (a.k.a. Fighting for Rome)

In veteran wargamer M. Evan Brooks' words, "a clumsy interface coupled with mediocre graphics shows why British products are generally not ready for the American market." Still, Cohort is one of the first detailed game of Roman military tactics, and as the fourth offering from Impressions in the "Micro Miniatures" series, it benefits from sharper graphics and improved AI. Unit formations and commands are also given a big overhaul from previous titles. Perhaps realizing that the ancient Roman setting is something worth exploring further, Impressions later released Cohort II, a much superior product that superseded this title. 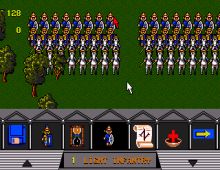 Cohort (a.k.a. Fighting for Rome) screenshot

People who downloaded this game have also downloaded:
Cohort II (a.k.a. Fighting for Rome), Imperialism, Centurion: Defender of Rome, Imperialism 2: The Age of Exploration, Battle for Moscow