Civil War is a below-average BASICA game distributed only among IPCO members. Due to limitations of the BASIC language and early 1980 hardware, the game amounts to little more than a quirky piece of PC nostalgia. From the MobyGames description: "Civil War is a war strategy simulation. You play as the confederacy in the Civil War, and need to allocate funds and decide on a strategy to win as many battles as you can. Each turn will provide a brief overview of the battle, and allow you to allocate funds for food, salaries, and weapons as well as choose the offensive or defensive strategy you wish to use. The computer will then display the results of the battle which depend on the choices you make. The battles used in the game are actual battles from the war, and the computer will compare the results of the choices you made to the actual historical results." 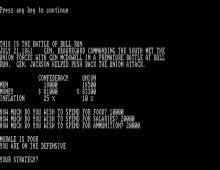