Championship Backgammon from Spinnaker is an excellent early backgammon computer game - probably the first to offer a competent AI (a computer player named "Max") which is strong enough to challenge frequent players. There are 5 difficulty levels in the game, and you can set up your own positions, choose whether or not to match scores, change game speed, and toggle other options. The board looks decent enough in 4-color CGA, and making your moves is a simple matter of typing the numbers for various positions. Although it has naturally been superceded by newer, more powerful games like Jellyfish, Championship Backgammon provides a fascinating trip back in time to when computerized board games were still few and far between. The game is still fun after more than a decade later, and stands the test of time surprisingly well. A long forgotten relic in the history of backgammon games, Championship Backgammon deserves a spot in every backgammon player's library. 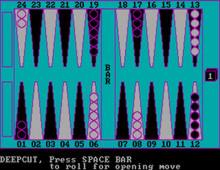