In 1995, Epic Megagames published a number of shareware computerized board games designed by Twisted Pine Software. Branded "Brainiacs" series after a movie of the same name, the games did not do well commercially, and today remain some of Epic's most obscure releases. Which is a pity, because Epic Hoppers, Epic Connect, and Epic Checkers offer excellent play value. Programmed for Windows 95, all three games boast multiple difficulty levels, hint and undo options, and nice graphics. If you are looking for traditional parlor games to while away coffee breaks at work, check them out.

The rules of Hoppers: "Hoppers occupies an older branch of the same family tree that gave us Chinese Checkers. The idea is to swarm out from your home camp, battle your way through a no-man's-land, and occupy your opponent's camp while he does exactly the same in your direction. It's a bloodless battle, no prisoners are taken, but the game goes to whoever can pick and leap their way most quickly through the milling crowd in no-man's-land. On a turn, a player can either move or jump. A move is moving a piece to an adjacent vacant space in any direction, including diagonally. A jump is jumping over an adjacent piece, in any direction, including diagonally, into a vacant space. If more jumps are available for the moving piece, the player can take them or not. Jumping and moving are done within the Corner Camp exactly the same as outside it. The pieces jumped over can be either friendly or enemy, and they are not taken from the board. The first player to fully occupy the enemy's Corner Camp is the winner." 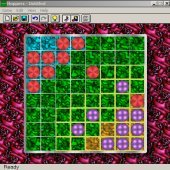