Well, this is not bad - it's a solid Backgammon game that can be played easily. There don't seem to be any bugs and the interface is simple. It's nice for those Backgammon players who like a round every now and then, an experienced tournament player on the other hand will not be satisfied with this program. There is only one level and that doesn't seem to be very high - at least I was able to win all the time. Well, although I played Backgammon (the original board game) quite a lot some years ago - even played on one or two tournaments - I'm not a very strong player (anymore ;) ). You might want more of a challenge than this little game - however, it't still nice for the beginner or people who simply don't like to lose.

One of the first backgammon games for the computer, Backgammon from IBM is a solid rendition of the popular board game. Despite its age, Backgammon stands the test of time fairly well, with crisp graphics, decent computer opponent, and the usual assortment of options (hint, take back move, etc.) that are common in later backgammon games. If you like backgammon, this early classic is well worth a look. Recommended! 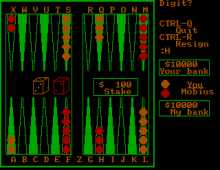