Champion of The Raj

Champion of the Raj is a unique strategy game that depicts the competition among the British, Maharajas, Monguls, and Gurkhas to claim India in the 1800s for their own. The accumulate-resources-to-raise-army approach of traditional conquer-thy-neighbor games is presented under the trappings of intriguing culture that you control. For instance, the Maharajas can orchestrate elephant racing to raise money, British colonel commands a powerful army of musketeers, and Mongol khan control the formidable horsemen. Because of these different units and other, more subtle, differences, each race requires unique strategies to win, giving the game considerable replay value. Competent AI and pleasant graphics and animation round off this old game that should appeal to fans of KOEI's Oriental strategy games, as well as anyone looking for a unique premise in strategy game. 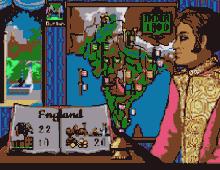 Champion of The Raj screenshot