CGW's Chuck Miller said it all in his review of this tremendously popular shareware game: "Based on the traditional outdoor diversion by the same name, [Capture The Flag] pits the player against an opponent (human or computer) in an effort to capture the other's flag. The goal is simple enough -- capture the enemy's flag before one's own flag is taken. Unlike most wargames, Capture the Flag is primarily a non-violent offering with a brief learning curve. There is no death or destruction; no one is ever killed. Like its namesake, enemy players are captured (in a cute animated, cartoon-style scuffle) and sent to "prison," a waiting zone, where they remain for the duration of the game (or a set number of turns).

[The game] is very easy to play. Two small teams are deployed over an extensive battleground. Play is turn-based, each player moving his or her characters and assigning them individual commands until available movement points have been expended. The playing field itself is comprised of several well designed and varied terrain types, ranging from flat grasslands to forests, and even rocky badlands. In addition, a terrain editor is provided for constructing one's own battlegrounds. Graphics are of very good quality and provide an enjoyable gaming environment (the appearance is similar to that of a Windows-based product). Character animation during movement is smooth. Sound effects enhance the playing experience. The icon-driven interface is simple and very intuitive, so much so that what little instruction is needed for play is available through a built-in help feature. Overall, it is evident that care was taken in the development of this product, its presentation being of commercial quality." Overall, this is one of the very best shareware games ever made. 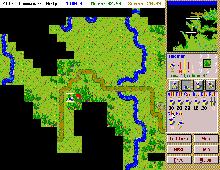