One of the first abstract wargames ever made, Call to Arms is unfortunately not among the best, although it is by no means a bad game. There are only 2 maps to choose from: Europe in 1942 and Scotland in 1750, but at least you can toggle various options to make the game more replayable, such as random assignment of countries and the number of initial force in each.

Gameplay in Call to Arms is perhaps best described as a "numbers" wargame: orders are limited to reinforce, attack, and pull, plus choosing the number of units to carry out each of these orders. After you finish your turn, the computer than makes moves and calculates combat losses and wins, updating the number of units in each territory for the next round. When one player captures all the territories on the map, the game ends.

In the end, Call to Arms' limited gameplay is both a boon and a bane to wargamers, depending on what kind of game you want. If you prefer complex wargames with a lot of statistics and realistic features, this isn't a game for you. On the other hand, if you enjoy Risk or even chess, give Call to Arms a try. It's a solid beer-and-pretzel board wargame for the computer that's worth a look. 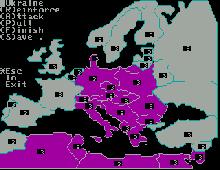