Battle Commander is an above-average real-time strategy game from Korea that looks and plays very similar to Command & Conquer, down to graphical style of buildings and even the menus. Like Westwood's classic, Battle Commander offers a challenging balance between real-time combat and base building simulation. You need to gather precious resources to build units and structures, while other players do the same. There is little innovation here to elevate Battle Commander above being a mere "C&C clone," but at least the AI provides a decent challenge, and you can play against other human players over modem or LAN connection. Recommended for armchair commanders who can't get enough of Command & Conquer, but everyone else would be well advised to play the real Westwood classics instead (and for the record, I think Dune 2 is far superior to Command & Conquer and its sequels). 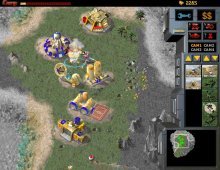 People who downloaded this game have also downloaded:
Lords of The Realm 2, Lords of the Realm 2: Siege Pack, Civil War Generals 2, Warhammer: Dark Omen, Close Combat 2: A Bridge Too Far