Battalia is the most recent game designed by Dr. Peter Turcan, a passionate historical wargamer who pioneered the use of realistic 3D terrain and real-time gameplay in computer wargames in the early 1990s. Although the most ambitious and open-ended of all his games (designed primarily not to be a game, but a game system capable of modeling any historical conflict), Battalia unfortunately feels too outdated compared to more recent wargames such as Breakaway Games' Waterloo. It is perhaps in concession of the fact that Dr. Turcan decided to release Battalia and all related documentation as freeware.

If you are familiar with Dr. Turcan's earlier games, you'll feel right at home with Battalia. Although the 3D terrain does an excellent job of giving you a "feel" for the topography, the gameplay mechanics still remain largely crude: in combat, either your unit or your opponent's unit is destroyed. The units in the game are 2D graphics scanned from Dr. Turcan's own miniature collection, but unfortunately this obvious labor of love makes the units look like amateurish paper-doll cutouts against the much more versatile 3D terrain.

Dr. Turcan deserves kudos for packing a lot of features in Battalia. In addition to 2 included unit graphics and battle sets (American Civil War and Napoleon's wars), the game includes an easy-to-use map editor that allows you to create your own battles. And if you dislike the 3D terrain, you can switch to the more traditional 2D 'bird's eye view' mode to give orders (although the game is still played in real-time). There is a number of annoying quirks, such as the fact that when you switch from 2D to 3D view, you always end up looking north. Although the typography is accurately modeled, the terrain is largely sparse, lacking landmarks to orient yourself with.

At the end of the day, Battalia will probably appeal only to die-hard wargamers who love realistic terrain simulation. As said in the preview at Wargamer.com, "Battalia is an exceptionally detailed system that should produce accurate and historically acceptable grognard pleasing results. It is not, however, a game for the faint of heart. The game cannot be simply picked up and played; the player is expected to already have some knowledge of the battles that are re-created, an interest in the period and lots of time. Gameplay is slow and whilst some would describe this as "absorbing" this previewer suspects many more would perhaps describe the game as "boring". The graphics are a massive improvement on Peter Turcan's earlier games but by the standards of today are lustreless and uninspiring.

...Perhaps the best way to describe this simulation is as it being an "acquired taste". The grognard with time on his hands and the patience to master the system will likely be rewarded with faultless results beyond compare as he plays through an eminently satisfying experience. The non-grognard though will in all likelihood have neither the time nor inclination to put in the necessary work needed to get the most out of this game." 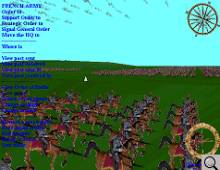 People who downloaded this game have also downloaded:
Lords of Magic: Special Edition, Lords of the Realm 2: Siege Pack, Battle Commander, Lords of The Realm 2, 101 Airborne: The Airborne Invasion of Normandy