Aya is an excellent freeware Go program coded by Hiroshi Yamashita. The game's AI ranks approximately around 12 Kyu in Japanese system, which means it should prove very challenging to a casual Go player.

Aside from featuring a tough AI, the game sports pleasant graphics and a good nuimber of options, including board sizes, colors, and a full set of move-by-move replay options. Aya also supports Standard Go Modem Protocol (SGMP), which means you can use this program to play against another human player via modem whose program also supports SGMP (Aya or other programs such as Many Faces of Go). The game unfortunately does not have "hint" feature, but at least it includes many constructive ways to display the board (e.g. you can view fixed areas, values, or only "life and death" groups). Overall, this is a solid freeware title that is perfect for anyone who is learning Go, or considers him/herself an average player. For a stronger game, check out Ishi Press' Many Faces of Go instead. 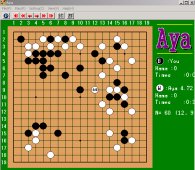